Just by implementing a combination of such simple ideas, Mitsubishi Gas Chemical was able to develop AGELESS the world’s first free-oxygen absorbing agent.

The free-oxygen absorbing agent, AGELESS, absorbs oxygen in a sealed container and creates a deoxidized environment, where the concentration of oxygen is 0.1% or lower. This way, it is possible to preserve foods by eliminating the ill effects of oxygen. The free-oxygen absorbing agent AGELESS preserves both the taste and freshness of food. This outstanding feature of AGELESS also expands its application to pharmaceutical products, clothing, and cosmetics.

AGELESS is also used widely to ward off mold as well as mites from clothing and bedding. 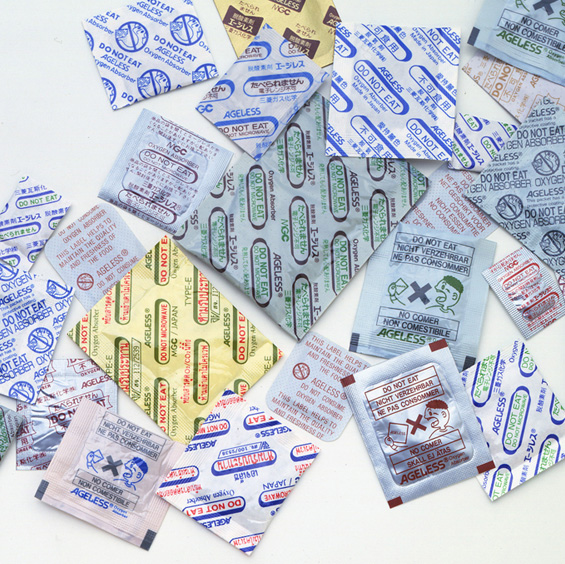 The main constituent of AGELESS (iron type) *1 is a specially treated iron powder. When iron rusts, it absorbs oxygen in the process. The result is deoxygenation of the sealed container *2 through oxidation, preventing any bad affects to the product.

AGELESS Prevents Molds.
In an oxygen-free atmosphere (oxygen concentration of 0.1% or lower), AGELESS shows a marked ability to suppress the growth of molds.

AGELESS is effective on insect eggs.
Oxygen-free packaging using AGELESS allows you to eliminate both adult insects and their eggs, a feat hardly achieved by fumigation. The oxygen-absorbing agent is safe: no more worries about residual chemicals.

AGELESS prevents food colors from changing.
Oxidation of food causes its color to change. Natural pigments such as the chlorophyll (green) and carotenoids (red) change their colors rapidly, which is promoted by light and heat. Packaging with AGELESS prevents the discoloration of food.

AGELESS preserves both flavor and nutrition.
The attractive flavors of tea and coffee and dried laver, or the vital nutrients, Vitamin E and C, are quickly deteriorated or lose their potency through oxidation.

The graphs below showing the oxidation of Vitamin C with age demonstrate just how effective AGELESS is in retaining this important nutrient. 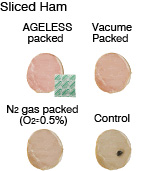 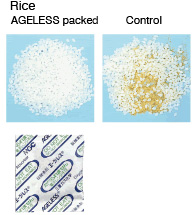 Select the AGELESS type that best suits your purposes.

Place AGELESS with food in a container or film wrapping which is impermeable to oxygen. Thoroughly seal the container or the film sheet. When inserting AGELESS manually, you only need a heat-sealing machine for easy and simple packaging. An automatic AGELESS inserting machine, suitable for interlocked operation with existing automatic food packaging machines is available to allow continuous AGELESS insertion.

Coffee
Oxygen and carbon dioxide are both absorbed simultaneously.

Main components are organic, thus this type of AGELESS will not affect a metal detector.